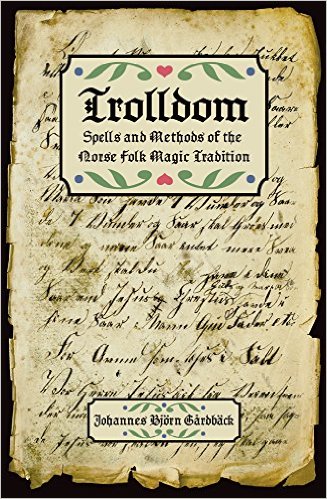 Over the last year and a half my magical practices have started to take a change towards more folk magic systems.  To me the lack of formalized ritual for spells is much more appealing than the need to invoke deities for every spell or magical action I perform.  In many ways folk magic traditions relate to me more than most of the modern witchcraft practices as they do not make magic separate from day to day life.  Magic in this instance was a tool for life nothing more or less.  Folk magic simply was and is The Magic of the people.

I’ve been focusing on Hoodoo which is an American system of folk magic created during the slave era and deeply tied into African American culture and Southern Culture in general.  I figured as an American I might as well look into a system of magic that was born here in this country.  Often times I get mixed views on my interest in Hoodoo as I am not Black nor am I from the south. I am a Northerner.  I am from Maine and I have never lived outside of Maine.  So for some of them I was participating in cultural appropriation.  Not being from the South or Black how could I understand all the intracices of the culture?  How could I honor those ancestors?

One common theme of advice I was given was to look into my own personal heritage and see what sort of folk magic traditions I could explore.  I’d be honoring my ancestors and I would be staying within specific cultural guidelines.  For this reason I looked up and did some searching on Germanic or Norse style of Folk Magic.  Trolldom was the topic that came up.  So when I was given an opportunity to read a book on my own ancestral practices and traditions I was all over it.  It felt right to be reading that book and to start looking at adding some of the workings into my own practice.

If you are expecting spells and forumulas that deal with the Norse Gods you wont find a lot in this tome.  Most of the spells either deal with a land spirit or they call on Jesus, God,Mary,The Holy Spirit, or the Devil.  Like most folk traditions alot of the pagan elements are still there but you will have a hard time to find specific workings with the Norse Gods.  There are plenty of books on the market for Nordic witchcraft and magic that deals with those deities.

This is the magic of the people.  We are lead to believe that all the magic died out when the Norse Culture became Christianized.  That is simply not the case.  In fact many of the old workings which dealt with the old gods were simply modified to deal with the spirits and the religion of Christianity.  Knowing this now I am still quite happy with the material in this book as I feel it still connects me to those ancestors.  Afterall my most recent ancestors would have been Christian.  So if they practiced this craft or if they  had a family style of Trolldom it is the Christian spells and spirits they would have worked with.

For the reasons above I have read and enjoyed reading Trolldom.  It took a long time to read.  This book is intense and full of information.  I spent a lot of my early days with the book just going back and forth with the glossary at the beginning of the book.  There were so many new terms and phrases to learn and understand.  The language component in this book is one of the most important elements but it is also one of the most difficult components to deal with.

The language barrier involved in this project is the reason there are two sections based on language.  You have a glossary (which is right after the dedication) and then you have a section on different terms for different practices within this particular set of workings and systems.  Trolldom encompass more than just Norway and Icelandic magic which is why the language issue is present.  This book actually ecompases quite a few different “Nordic” cultures.  It covers Norway, Iceland, Sweeden, and Finland as well as having a bit of Anglo-Saxon and some Lore preserved in Powwow or the Pennsylvania Dutch traditions.  For this reason the section for the glossary and on the terms is not only important to mark and return to throughout the book, but is an essential part of understanding this practice.

This book is broken into a few different sections.  First is the glossary which was the most difficult to get through.  The second section is about the History. Here the author showed how and where Trolldom survived.  I find it interesting to note one of the places visited and mentioned in the book is in my Home state of Maine.  Its not a town I have been to or near but it in some ways brings this book and its workings closer to home.  I feel better knowing that there are places in my home region where this practice was passed on in some manner.

After history you had the terms.  This section was about how different regions had different names for the practice of Trolldom and the practitioners of Trolldom.  Here we also got into the discussion about how one learned Trolldom and how you could become a professional in the art of Trolldom.  In this culture Trolldom was not just a practice it was an honored profession that many people would take advantage of.  You had your specialists and a few generalists each with unique skills and practices as well as a unique term for their practice.

The next section was on divination on the two different terms and styles mentioned.  For me the importance divination plays in Trolldom shows me a relationship with Hoodoo.  Trolldom has infact been called the Norse Hoodoo, so I would say that the use of divination in magical practices and how they dictate the works to be done is a key component in folk magic.  It seems today more and more people are just doing what ever type of working seems to be the best for them and their situation without taking the time to check the source of the problem or situation.

Finally we get into the workings or the methods.  These spells are called Formulas.  The book has many different sections from Health and healing, to hunting, protection, curses, and even a group of miscellaneous spells.  What I liked best about this section of the book was the fact that there was the English spoken components translated but you could also see the original language as well.  For me this shows just the amount of work that went into this tome.

I will say there are several spells and workings that are basically included only for historical accuracy.  Some items listed in spells like animal parts or human bones are not as easy to get a hold of as they may have been at one point in time.   There are some spells that mention digging up and harvesting things like bones of dead men or going to hanging sites.  Many of these practices are not readily acceptable in the world we live in today.  However if you wish to understand a tradition that has been around for centuries you really need to understand these historical spells.  There is enough material that you can find spells and formulas that are suitable for today’s society.

I hope that the author will continue the work and write a book just on the herbal charms and herbal uses in this book.  While you can find several herbs mentioned in the folk name as well as botanical and a common name, only a small selection of the possible herbal charms are even shown in this work.  For many people who practice folk magic Herbal magic is a huge part of the practice.  So I would encourage the author to work on an herbal trolldom book.